Five or So Questions on Standard Action Season 3

Season 3 of Standard Action goes live TODAY! Check out the webpage at http://www.watchstandardaction.com/.

Sorry for posting so late - illness and such got in the way.


Tell me a little bit about Standard Action Season 3. What excites you about it?
Answered by Rob Hunt, director, cinematographer and editor for Standard Action:

Season 3 joins our heroes a few months after season 2 has ended. First and foremost we answer the question everyone has been demanding to know.. What happens to the Efreeti head in a bucket after the party abandoned it in the forest?

Season 3 has a lot of interesting things going on in it. We can look forward to many guest stars from other web series including Transolar Galactica and Journey Quest. We will get to see a few old faces from season 1. We also get to find out more about Ikosa and who she is. The Rogue, Gary joins the party to help them on their quest to find Martin the Druid as he has been lost in another realm of existence.

I'm really excited to be launching the card game and Pathfinder module for Standard Action. Both projects help expand the Standard Action world and are part of our season 3 Kickstarter. The card game is a simple party building game where each player builds a party of heroes and goes on adventures. Torvel can betray his party every round! Slay baby eating kobolds! The Pathfinder module explores the adventures of the party between season 1 and 2. As they try and identify a magic bracelet and how it ended up becoming a taxidermied squirrel by season 2. Take your role playing to new heights with encounters like, the fashion show! A taxidermied zombie shark with a wand of magic missile on it's head! Kobolds!

Finally, as post production guy, I really enjoyed doing different looks for some of the different alternate realities they visit. I started that a bit with the office portions of season 2 being silvery and desaturated. I got to do looks for a dream world, a musical world and a science fiction world. It was a lot of fun working on that. 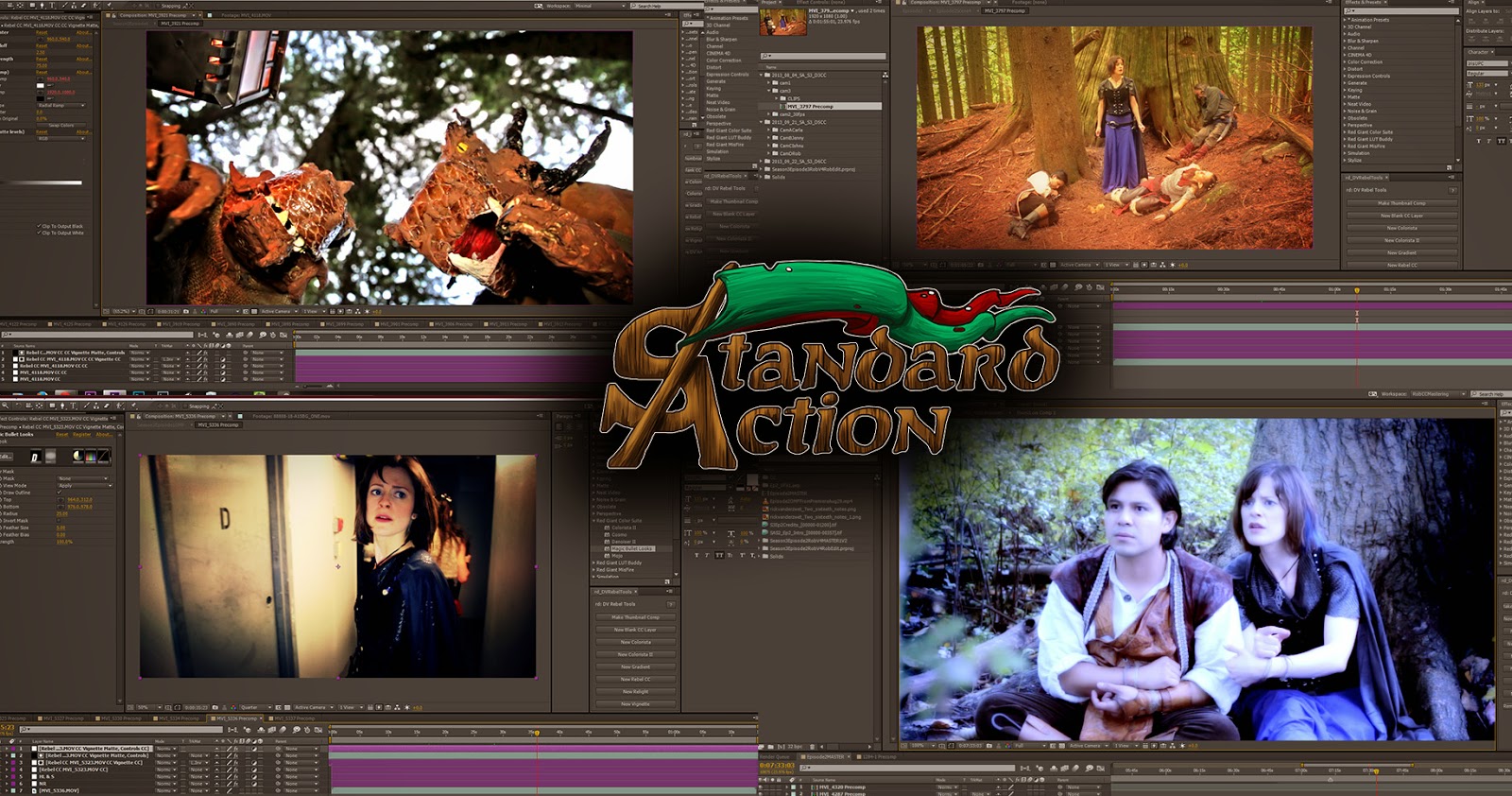 What characters are we going to see the most of this season, and why?
Answered by Joanna Gaskell, producer, writer and actor for Standard Action:

Well, we ended Season 2 with Edda, Fernando and Wendy whizzing off into the planes to go looking for Martin, and taking a very surprised Rogue with them - Gary, played by David Pearson. We're definitely going to be seeing a lot of those four characters, but fans will be pleased to know that they certainly haven't seen the last of Martin the Druid, who has been with us since the beginning. We're also coming full circle a bit on this season, so fans will see a lot of the faces they saw back in first season reappear. Jaina the Bartender will show up again, for instance, as will Cedric the Wizard, who has always been a fan favourite.


What did you have to do to prepare for the new season using the Kickstarter funds?
Answered by Joanna Gaskell, producer, writer and actor for Standard Action:

This season has certainly been our biggest yet. The script was a little more ambitious, including five different sets that had to be built in the same small space. We had a lot more cast to deal with as well, all of whom had to be costumed, and some of whom were special guests being brought in from out of town. We upgraded equipment and added a slider and some better tripods to the mix, as well as a better sound recorder. The musical carried a few of its own expenses, developing the songs and lyrics, and booking the studio time needed to record. As always though, our biggest expense is labour, so we put aside a lot of that Kickstarter money to fund the actual production. We had to bring a few more people to set this year to deal with the complexity of our stories, and we try to pay everyone as best we can.

Tell me about the music for this new season. Who all do you have on the project?

Answered by: Kersten Tennert, sound and music for Standard Action -

The music for the new season is a wonderful concoction of both effects-driven samplers & synths with big delays, reverbs, and even reverse effects, and recordings of acoustic instruments. The fantasy element of "Standard Action" allows us to bend the rules of classical orchestration, leaving the opportunity to build an assortment of instruments that are processed in unconventional ways, such as tribal drums, glockenspiel, or celeste with heavy reverse delay & reverb, or even ring-shifters.

That being said, it is still important to incorporate acoustic elements that play an important role in the show's setting, and overall mood. I'm using a fair bit of mandolin, acoustic guitar, acoustic-slide guitar, and even banjo for this season's score. Yes, even banjo! It is also important to change orchestration based on setting, and circumstance in a scene. For example, in Episode One, the team is aboard a space vessel in another plane, in a galaxy far, far away. So you'll hear that classic, familiar sound of a theremin in there. In more-comedic scenes with Cedric, for example, staccato notes, chromatic runs, and instruments with short decay may help push the goofy mood along. The writing is strong, and a huge part of the score is also knowing when the dialogue can speak for itself, and not being too obvious or suggestive that the audience "should" feel a certain way, by shoving music in their face.

Lots and lots to consider with score! This season's post-production schedule has been arranged to have enough time to really polish each episode off, down to every last little detail, so I'm really thankful to be granted the opportunity to experiment. Joanna has been pretty good about making sure that I'm on the right track. Like with any collaboration, things can be up for interpretation, so it's fun to find out that we've had different takes on what certain scenes might need for music. For example, the first scene of Episode Two was intended to be dramatic with a darker tone, but wacky, maniacal, lighter music actually really sold the scene.

There is a musical episode this season! Our cast did vocal training with Camille Johnson, who wrote a number of songs for the musical episode. She laid down a piano scratch-track and we worked out what the tempo would be for each section, and where all the pauses would be, and then we brought everyone into the studio for one massive vocal session. It was amazing. Everyone had such a fun time and really shone. Some of the cast came from a musical background - even opera trained! - and others hadn't had much experience at all. Camille & and the cast did SUCH a great job. After all the vocals were edited & mixed, the scratch tracks were then built into these large orchestrations to sound totally Disney-esque. That episode is a standalone, for sure.

This season is the biggest, by far. Everyone has grown, professionally, and people are constantly upping their game; more complex writing, more elaborate costume design, more sophisticated visual effects, longer episodes, more tools and toys. It is so amazing to be part of a team of such eager, hard-working and friendly folks. Joanna is such a strong leader who fully understands that this is entirely a team effort. She knows how to step back and trust people to handle things, and allow them the space for their talents to shine, while also being able to pull things together and be our general.


Rock on, Indie Filmmaking!
Posted by Unknown at 6:00 AM

Email ThisBlogThis!Share to TwitterShare to FacebookShare to Pinterest
Labels: five or so, interviews, RPGs, shows